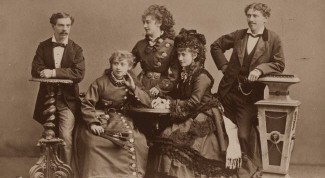 It was during the 1870's that Pantomime at Drury Lane, then under the management of F. B. Chatterton, became almost the monopoly of the remarkable and youthful Vokes family. This troupe, composed largely of brothers and sisters with a few co-opted Vokeses, enjoyed a long spell of popularity there. It included Fred Vokes, the 'legmania' dancer, his three sisters - Jessie (who carried out all the business arrangements and 'mothered' the family), Rosina (the cleverest of them all) and Victoria, who was equally good in melodrama and serious plays, together with Fawdon and Walter Vokes, who were 'adopted,' and Mrs. Fred Vokes.

The real Vokeses were the children of a theatrical costumier who took to the stage very early in life. Victoria went on the stage when she was two and Rosina made her debut as a baby in long clothes. They were all good looking as well as agile dancers and they toured as a troupe of family entertainers with a repertory of one-act humorous plays.

Fred's first pantomime engagement as a boy was at the Marylebone Theatre in 1863, after which he had Christmas engagements in Exeter and Sheffield. The Vokeses first appeared in W. S. Gilbert's Pantomime at the Lyceum in 1866 when Rosina was only seven. They reappeared there in 1868 in E. T. Smith's production of Humpty Dumpty and Dame Trot and Her Cat.

The real star of the troupe was Fred Vokes. Inferior to the Paynes as a pantomimist and comedian he nevertheless soon gained a great reputation as a dancer. No one, with the exception perhaps of Fred Storey, ever did such wonderful things with his legs with the same ease and unconcern as he. 'Other dancers may have achieved more extraordinary feats of legmania, but for grace and finish his equal has not been seen.' wrote one of his admirers.

In his notice of Humpty Dumpty the Daily Telegraph critic said that Fred Vokes 'dances as few men in this world probably could dance or would wish to dance. The extraordinary contortions of limb in which his dancing abounds - contortions which in Mr. Vokes's hands - or rather legs - are not lacking in grace - are highly suggestive of the impossibility of his suffering at any time from such accidents as dislocations.'

The Vokeses' first engagement at Drury Lane was in 1869 and each year until after 1879 - except in 1873 when they toured abroad - they had all the principal parts in the Pantomime.

In Tom Thumb; or, King Arthur and the Knights of the Round Table in 1871 no one else in the cast had a chance. As The Times said:

'The great weight of the work fell on the Vokes family and this talented clan, both as singers and dancers and in the comic business as pantomimists, exert themselves to the utmost and earn whole acres of laurels.

'The manner in which first the crown and then the wig of Mr. Fred Vokes as King Arthur persisted in tumbling off while that monarch indulged in unusual gyrations excited tumultuous laughter, and if there could be anything funnier than Mr. Fred Vokes's 'split' dance it was his step dance, Lancashire clogs, Cornish reels, transatlantic walk-rounds, cellar flaps and breakdowns, college hornpipes and Irish jigs. Nothing in the way of dances came amiss to the airy monarch whose legs and arms seemed to spin round on pivots and who seemed at once to stimulate the actions of the cockchafer and the grasshopper.

'He was well assisted by Mr. Fawdon Vokes as the court fool who had apparently danced himself out of his mind in his infancy and had lived on tarantula spiders ever since. All the Misses Vokes (Victoria, Jessie and Rosina), fascinating in their attire, ravishing as to their back hair and amazing in their agility, were fully equal to the occasion. When they didn't dance they sang and danced simultaneously and then all the Vokeses jumped on one another's backs and careered - so it seemed - into immeasurable space.'

In Aladdin in 1874 Fred Vokes was Abanazar, Fawdon was Kazrac, his dumb slave, Victoria Aladdin, 15-year-old Rosina the Princess and Jessie the Genius of the Lamp. In 1875 they had all he best parts in Dick Whittington - Walter Vokes being added to the cast as the cat - and in The White Cat in 1877 Victoria was Prince Natty the Neat, Jessie Prince Nectar the Nimble, Fred Prince Tremor the Nervous, Mrs. Fred Vokes Blanchette and Walter the goblin imp.

The Vokeses appeared to do what they liked in the Pantomimes. There seems little doubt that the troupe needed some kind friend to direct their considerable but undeveloped talents and that they would have benefited by stage discipline. As one critic said in 1878, 'They dance exactly as they have danced for years past....If they want to retain their hold upon the public they should get someone to concoct for them new modes in which to display their exceptional gifts.' Other critics complained of their unchanging 'business' and that, anyway, they monopolised the Pantomime too much.

It could have been good neither for the family nor for the Pantomime that the Vokeses should appear for so long under one management. It tended to cramp their individual styles and to stereotype the Drury Lane Pantomime, which was sadly getting into a rut.

Their last engagement under F.B. Chatterton was in Cinderella in 1878. That production came to a premature end, for Chatterton had struck financial disaster. The Vokeses not receiving their salaries one Friday night refused to appear and the theatre suddenly closed down on 4th February, 1879. By that time Rosina had married Cecil Clay and had retired from the stage.

Following Chatterton, Drury Lane came under the control of the 28-year-old Augustus Harris, who at Christmas produced Bluebeard with Victoria Vokes as Fatima, Fred as Bluebeard, Mrs. Fred as Anne, Jessie as Selim and Fawdon as Shacabac. It was their last appearance at Drury Lane. Harris did not like the Vokeses whom he probably regarded as spoilt children, and the Vokeses considered him to be a tyrant.

At Christmas, 1880, they migrated en bloc to Covent Garden, where they appeared in Valentine and Orson; or, Harlequin and the Magic Shield, which was written by F.C. Burnand. Of this production one critic wrote:

'They bear the main burden of the present Pantomime. If at times their 'business' was unduly elaborated it is a fault that subsequent performances will amend. Their dancing, however, is as ever of the lightest, wildest and yet most finished character.'

Rosina's marriage helped to break up the family, most of the members of which died very young. Rosina was only 36 when she died and Jessie and Fred pre-deceased her. Fred's talents never reached full development, and had Rosina continued on the stage she might have left a name as one of our foremost comediennes. I am told that their individual talents were much better displayed in such playlets as Belles of the Kitchen and The Rough Diamond, in which they toured in England and America, than in Pantomime.

With their departure Drury Lane Pantomime, with new ideas, new methods and new conditions, took on a fresh lease of prosperity.

Extracts taken from PANTOMIME PAGEANT by A.E. Wilson - Published in 1947 by Stanley Paul & Co Limited and out of print.