JAN HUNT presented ôVariety Bandbox 2ö  played to a highly appreciative house at Croydonĺs Ashcroft theatre yesterday. I spent a very pleasant day rehearsing then performing with some of the stars of Music Hall and Variety, many of them strongly associated with pantomime of course! 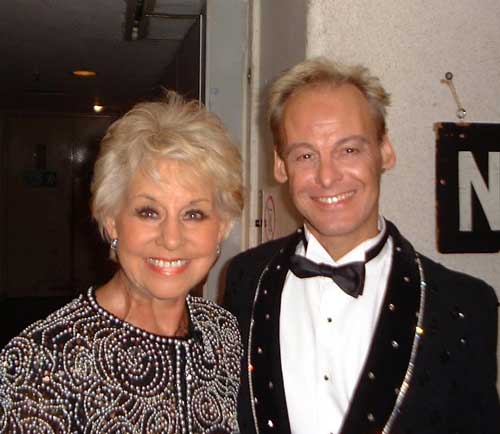 The show was presented and compered by Jan herself - Peter and I have appeared many times in panto with Jan over the years- one of the finest Principal Boys  ever to strut the stage, Jan now waves a magic wand as Pantomime fairy each year, and certainly waved a magic wand on todayĺs proceedings- based on the successes of her recent Variety Bandbox and VE day shows here at Croydon, she assembled a strong bill  of variety at its finest-including two veterans of the golden age of variety, JIM CASEY and ELI WOODS. Jim and Eli were joined by Janĺs co-host JOHNNY DENNIS to recreate the original sketch created by Jimĺs father, the legendary Jimmy James.

Jim Casey began his career in the 1950ĺs as a scriptwriter and producer for BBC Radio. He wrote and produced fourteen years of ôThe Clitheroe Kidö starring Jimmy Clitheroe, and continued  in radio, as well as appearing in the Good Old Days, the Royal Command performance in 1982, and recent appearances in ôThe Last Of The Summer Wineö. The Jimmy James connection continues with Jimmy Jamesĺs nephew, Eli Woods. 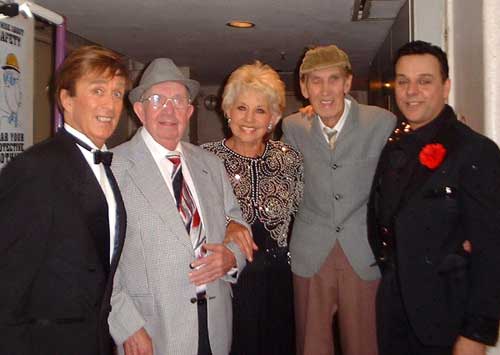 Eli Woods ôOur Eliö was part of Jamesĺs touring variety act, and after the death of Jimmy James became as solo act, teaming up occasionally with Roy Castle, and appearing on Royĺs television shows. His film career began with Norman Evans in ôOver The Garden Wallö and includes ôA Private Functionö with Maggie Smith. In Pantomime at the Leeds Grand in 1970  Eli met his wife to be, Pam. It was Michael Parkinson who invited Jim Casey, Eli and Roy Castle to recreate the famous ôItĺs in the boxö sketch- ôAre you putting it around that Iĺm barmy?ö

Roy Castle had served  a three year apprenticeship with Jimmy James, and the resulting  success of the sketch revived saw Jim, Eli and Roy at Drury Lane fir the Royal Command. Today the sketch was revived with Johhny Dennis as ôHutton Conyersö, the man who keeps two man eating lions in a shoebox! AND.. an elephant..

Watching this sketch from the wings, I was delighted to see Janĺs son, Damian (twenty-four years old today- Happy Birthday Damian) literally ôfalling aboutö with laughter at a sketch that is patently as funny now as it was back in the 1940ĺs.

Johnny Dennis shared the ôchairö of todayĺs show, as well as taking part in the sketch-as Chairman of the British Music Hall Society his knowledge is encyclopaedic, and, having banged his gavel at Leedĺs City Varieties for fifteen years, heĺs certainly the best man for the job, having begun his career at the Players Theatre London. 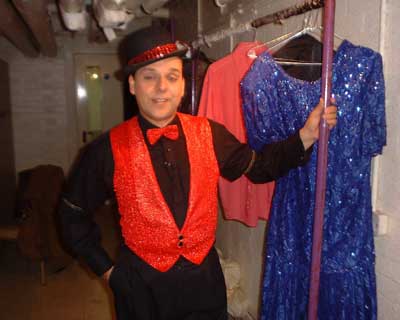 THE CONWAYS- Pauline and David - theôInternationalö Conways- they have played the world with their act, played the first half of the show- a musical speciality act that encompasses all manner of instruments from harmonicas to a musical saw, from classicals to standards. Jan had themed the first part of the show ôRhythmö, and IAN ADAMS had choreographed the four singer/dancers into a superb medley, beginning with the four- ANTHONY WREN, DOMINIC WATSON, TIFFANY TODD and MICHELLE GRANT Playing the drums. A skill taught to them at rehearsals by Bobby Cook, percussionist extraordinaire! Ian and Jan fronted this opening number as well, with ôThe Rhythm of Lifeö from ôSweet Charityö. IAN ADAMS is an accomplished Music Hall and pantomime performer. Often partnered with Vivienne McMaster in song and dance, Ian specialises in pantomime dame, and will be appearing this year as Sarah The Cook in the Regent's Park Zoo's premier panto "Dick Whittington" 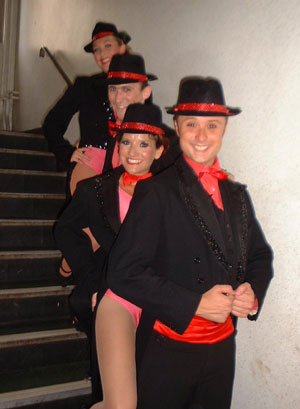 The first half included, in true variety style a speciality act by DELIA DU SOL.  You know when a ôSpeshö act is very good when the wings begin to fill up with fellow artistes crowding in to watch. I stood beside JOAN REGAN and DON MACLEAN to watch Delia perform her contortion act both on the ground and above the stage, suspended by white silks hanging down from the flies. Delia has performed all over Europe as one of the countryĺs top contortionist or ôTwirlersö- sheĺs toured with Ken Dodd and Jimmy Cricket, played pantomime and appeared high above the stage in an Opera, and even performed in Gandyĺs Circus in Dubai! 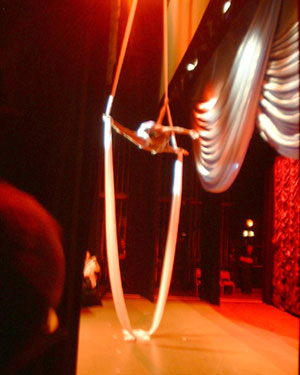 Just as Delia was suspended twelve feet above the stage, hanging on by one toe, Don Maclean leant over to Joan and whispered ôI bet that lot out there are all saying ôBy ĹEck, that Joan Reganĺs limber for her age!ö

DON MACLEAN closed the first half with a rapid quick fire comedy act- one honed to perfection through his years in the Black and White Minstrel show, Summer seasons, Thirty odd pantomimes (many of them as Dame) and, of course ôIts Friday, itĺs five to fiveů..ö Don starred with Jan Hunt and Peter Glaze in BBCĺs ôCrackerjackö for all those years! In the second half Don and Jan teamed up once again to present ôMastermindö, with Jan posing the questions and Don in the hot seat. Donĺs ôGood Morning Sundayö show on BBC Radio 2 has been running since 1990, and he was awarded the MBE in the 2001 New Years Honours list. It was lovely to catch up with Don and his wife Toni again, and sharing a dressing room we were able to catch up on panto gossip, and to hear about Donĺs recent play- produced by Ian Sandy- ôPlay Up Your Own Endö at the Birmingham Alexandra theatre, which was a complete sell out. The show also starred Malcolm Stent, who wrote it, Lizzie Wiggins and Birminghamĺs own  Jasper Carrott. 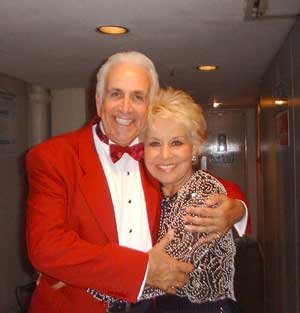 During the interval I ran into Keith Salberg- Keith was one of my first Entertainment Agents when I began in ôThe Businessö, and, it turns out, was responsible for Donĺs early career in variety and Summer season.

The second half- time for me to stop watching the show and get my costume on- I canĺt tell you what a delight it is to do a show in flat shoes! My piano spot was following Jan and Donĺs ôMastermindö, with the Grand piano moved to centre stage. Ian Adams had staged a routine that would be incorporated into my act, but for the dancers it involved a very quick change! I opened with a Scott Joplin medley of Ragtime tunes, then switched to Paderweskiĺs Minuet, as you do! The dancers entered in Eighteenth century costumes to dance ôthe Minuetö then gracefully glided off the stage, belted into the quick change room, and reappeared two minutes later in full ragtime sequin costumes! I played Ragtime numbers like ôAlexanderĺs Ragtime Bandö and ôThe Grizzly Bearö while Ian and Jan fronted the numbers with a cakewalk and two step. 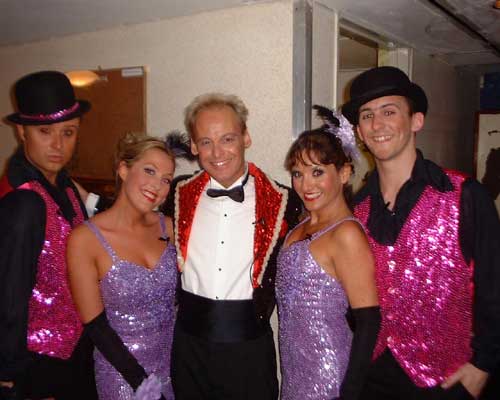 Hopefully I left the Grand in a good enough state for the showĺs Musical Director, DON SHEARMAN to continue with the star spot. Don has a long association with the West End and musical shows, as well as the British Music Hall Society. Don is a member of GOWR (The Grand Order Of Water Rats) and is, in fact ôMusical Ratö not surprisingly. He was joined by BOBBY COOK and DOUG HENNING on Bass to accompany the wonderful JOAN REGAN to close the show.

Once again the wings were filling up as people came to watch a singer, discovered by Delfont, star of her own television specials, Her series ôBe My Guestö ran for four years, the Royal Command Performances, Sunday Night At The London Palladiumö , perform her songs as strong and as lyrical as they were  when she first sang them. Joan has played variety theatres and appeared in pantomimes with the likes of Tommy Cooper, Morecambe & Wise and Frankie Vaughan, and today sang her heart out for a highly appreciative audience.

Assisting Jan in putting on this splendid show were RAE & FIONA GEORGE, who designed and created the scenery and props, MADDY ELLISON who assisted Jan throughout, as did Janĺs Son, DAMIAN HUNT, in his own right a very talented actor in both film and television.

Packing up my costumes  to leave I mentioned to Jan that the mark of a great show like this is, if I wasnĺt already in it, Iĺd be paying to watch it! Thanks everyone for a splendid day!