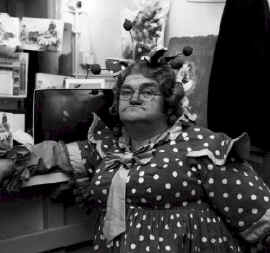 The role of the Pantomime Dame stretches back to the earliest origins of the theatre, when 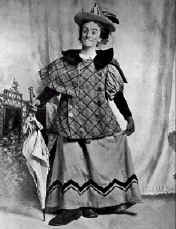 girls and young women were played by youths, and old women by men - often comically. The earliest ancestor of the comedic are possibly Mrs. Noah in the miracle plays of the middle ages.

Even after the restoration in the 17th century, when actresses entered the theatre, many were loathe to play older parts, and the convention continued. During the Regency the roles of witches, characters like 'Mother Skipton' and old harridans were played often by men, Grimaldi played several female roles, including the Baroness in 'Cinderella'. The Ugly Sisters at this time were played by women, later by men.

Dame roles remained variable up until the 1860's and later. The 1826 and 1836 productions of 'Aladdin' at Covent Garden had women playing the role of the widow, and then in the 1856 and 1865 versions, by a man. The first male 'Widow Twankey' was James Rogers, with Dan Leno credited as the creator of 'Mother Goose'.

The names given to Dames have altered over the years, but traditionally the Dame in 'Aladdin' is Widow Twankey. Christened in 1861 Twankay was a tea, popular in London at the time, from the Tuan Kay province of China.

Dame Trott takes her name from a slang word for an old hag, and became the popular name for Jack's mother in 'Jack and the Beanstalk'. Dame Durden also shares this relationship from time to time. 'Dick Whittington' has had a cook as Dame since its first performance, with the title 'Sara the Cook' given in most cases.

The Ugly Sisters have changed their names frequently to keep up with fashion. Originally Clorinda and Thisbe, they have been Daisy and Buttercup, Hysteria and Hydrophobia, Alexis and Krystle, Sharon and Tracey, with names changing as rapidly as their costumes, which often parody contemporary fashion. Comedy duos specialising in these roles include Grand and Mars, Ford and Sheen, Alan Haynes and Danny La Rue, Barry Howard and John Inman, and in recent times Peter Robbins and Nigel Ellacott. However, whereas 'Sisters' have to be sinister yet funny, the Pantomime Dame remains a beacon of warmth and sympathy.

Today the likes of John Inman, Danny La Rue, Don McLean and Tudor Davies carry on a tradition stretching back through the mists of time.