The Melville brothers, theatre impresarios, were both born in Swansea, South Wales.

Their father, Andrew Melville Robbins (1853-1896) and Mother Alice lived in the town, where he became proprietor of The Star Theatre in Wind Street.

They had eight surviving children- four daughters and four sons. The brothers took the Melville name for theatrical purposes, and many of the siblings appeared on stage at various times.

Edith Robbins appeared as Cinderella at the “New Theatre” Swansea (as Edith Millicent), and played Principal Girl for her brothers in “Sinbad” (1897) and “Dick Whittington” (1898) at the Standard Theatre, London. 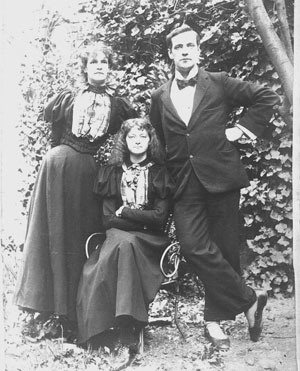 Their Father Andrew moved to Birmingham in 1894, by which time he owned the Grand Birmingham, The New Theatre Swansea and the Standard Theatre in Shoreditch London. 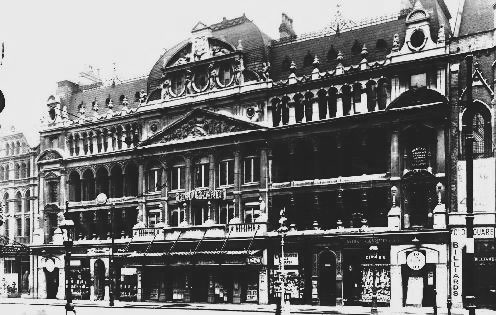 A year later he fell ill whilst in production for the pantomime “The Forty Thieves”. His twenty year old son Walter took over the production, and Andrew died during the run. 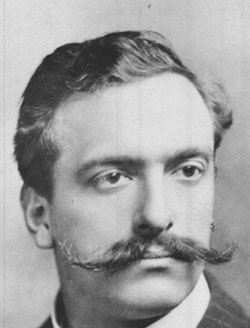 On his father’s death Andrew Jnr looked after the Swansea Star Theatre. He was aged just fifteen. His two older brothers tried to share the businesses amongst themselves- Walter looking after London and Frederick looking after Birmingham. Andrew Jnr later returned to his studies, and a full time manager was appointed.

Both Melville brothers married actresses. Walter married the actress Eva Dare in 1904. He had offered her a part in his production of “Her Second Time On Earth” at the Adelphi Theatre, and later they were married.

Eva Dare had appeared in several pantomimes, and in the 1897-98 Theatre Royal Brighton “Forty Thieves” had played the role of “Beda Beda” in that production.

Eva died in 1932 and Walter, aged 57 married again to an actress, Barbara Crosbie. Walter had one son, Walter Lloyd.

As an actor Frederick had used the name Louis Mervin before moving solely into theatre management with his brother Walter.

The Melville brothers began to expand. They leased (and sometimes bought) several London theatres: The Metropole, The Terris Theatre, Rotherhithe and in 1907 the Brixton Theatre.

Frederick ran the Brixton Theatre for 30 years. After his death in  1938 it was renamed “The Melville Theatre” in his honour, but it was destroyed by a bomb two years later,

In 1909 both Walter and Frederick took over the Lyceum Theatre They acquired the freehold for Ł240,000.. In 1911 they built the Princes Theatre- we know this nowadays as The Shaftesbury Theatre, London.

The brothers concentrated on popular melodramas- many of which they wrote and toured themselves, and for their 30 year reign as pantomime kings at the Lyceum theatre.

They eventually sold the Swansea Star Theatre, and, in the age of early cinema, it became, like many others a silent cinema house. (Later adapted it became the Rialto Cinema, demolished in 1968).

Their working relationship took a turn for the worse in 1921. At their separate offices at the Lyceum they were no longer speaking to each other. Lawyers were engaged, and eventually their quarrel came to a head.

The crisis occurred on the last night of  “Cinderella” at the Lyceum, February 18th 1922. It resulted in the Lyceum being closed for five months.

Both the Melville  brothers were stubborn men. No one knows  precisely how their quarrel started, but it endangered the future of the Lyceum. They were bound together by both business and affection, but neither would give way. This major quarrel had begun in 1921, and they ran the theatre but were not on speaking terms.

They occupied separate offices in the Lyceum, and communicated with each other by notes and letters carried by their respective secretaries, or by Bert Hammond, who acted as a go-between.

There was a dramatic scene on stage that evening in February. The Star of the show was George Jackley (Father of Nat Jackley).

Earlier on  during this last performance the Melvilles had met, and both had posted statements on the notice board at the stage door. It explained the closure of the theatre.

“It is with feelings of regret and sorrow that I am reluctantly compelled to say good-bye to the Lyceum staff and company, some of whom I have worked with since I was a boy- over thirty years ago. In the unfortunate circumstances which may result in the closing of this theatre I have tried my best for months past to keep the theatre open.

To bridge over the present trouble and keep the theatre open I have offered Mr. Walter Melville a two year’s agreement for him to manage personally. He has declined this.

I need only add that  offered Frederick Melville a 50-50 agreement as to profits y giving me full control for five years, I t cancel at any time if the profits fell below 7 per cent on the capital invested

Meanwhile, on stage the cast were receiving bouquets as the curtain fell. Suddenly George Jackley- playing the Baron- stepped forward and announced that the brothers were friends again.

As the audience cheered, Frederick came on from the wings on one side of the stage, and Walter from the other. They shook hands, and announced that their differences had been settled. The curtain fell to uproarious cheers.

Some time later the “Cinderella” company presented the brothers with a silver loving-cup to commemorate the event.

“Walter and I disagreed, and had decided to end our partnership and close the theatre. We were both behind the scenes on Saturday night, towards the end of the piece when some friends of mine asked if I would go on the stage and shake hands with my brother. I was hesitating when an impatient acquaintance ran to the footlights and whispered to Mr. Jackley. He immediately shouted to the audience “They’re friends again!”. Walter stepped forward and told the audience that we had been together for 25 years and he hoped we would continue for another 25 years. We have had no time to make further arrangements, but Walter’s word is as good as his bond. We are going to remain in partnership for another 25 years at least.”

The legal complications that followed- because the law had been set in motion, resulted in the theatre being closed for the next five months, at a cost of Ł800 a week, and 250 employees were thrown out of work. The theatre reopened on July 12th  1922.

The Lyceum pantomimes were hugely popular, and continued for almost thirty years, often written and produced by both brothers.

Both Walter and Frederick continued to run their businesses from the Lyceum up until the death of Walter in 1937.