Dan Leno, the most celebrated of all performers to play the role of Dame, was born in London in 1860. He brought to the part not just his comic genius and inventiveness, but great warmth and sympathy. As Marie Lloyd, 'Queen of the Music Halls' said of him, 'If we didn't laugh at him , we'd cry our eyes out'. 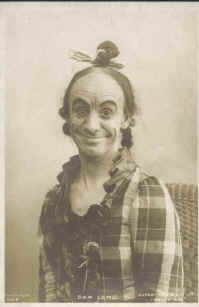 By the 1880's Leno had become one of the most popular entertainers on the halls. His speciality was the monologue and comic songs, and his characters were as diverse as the recruiting sergeant, a shopwalker, and 'Mrs Kelly', forerunner of his Dame career to follow. After seeing him in music hall, the pantomime producer George Conquest signed to appear as Dame Durden in 'Jack and the Beanstalk' at the Surrey Theatre, London in 1886. The following year Augustus Harris booked him to appear at Drury Lane, where he was to remain for the next sixteen years as star of Pantomime.

It was at Drury Lane that the role of 'Mother Goose' was created for him, in which he effectively created the modern pantomime dame. His entrance in bun-wig, shawl and button boots was to influence every pantomime dame that followed him. He arrived on stage sitting on a cart, pulled by two donkeys. On board was a crate of live geese. In true topical form a modern motor car runs into his cart, upsetting geese, dame and donkeys. The entrance was completed by Leno catching the geese whilst berating the driver in French, German, Italian and English.

By the end of the century Leno was at the pinnacle of his career. He successfully played New York in Music Hall, and appeared by Royal Command in front of King Edward VII in 1901 earning him the title 'The King's Jester'.

Sadly the strains of his career were to affect his health, and in 1903 he suffered a breakdown. Dan Leno was to die insane the following year. Enormous crowds attended his funeral procession. On his death the Times newspaper wrote 'To find anything like a close parallel to his style we should probably have to go back to the Italian commedia dell'arte'.

Dan Leno is still considered, with Joseph Grimaldi, the finest of all pantomime performers. 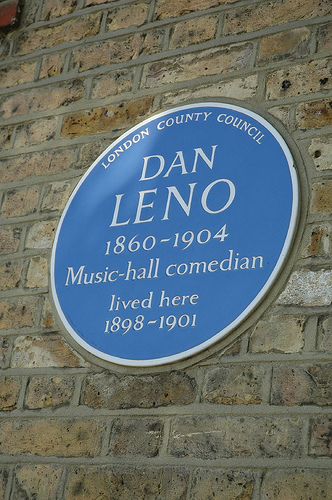